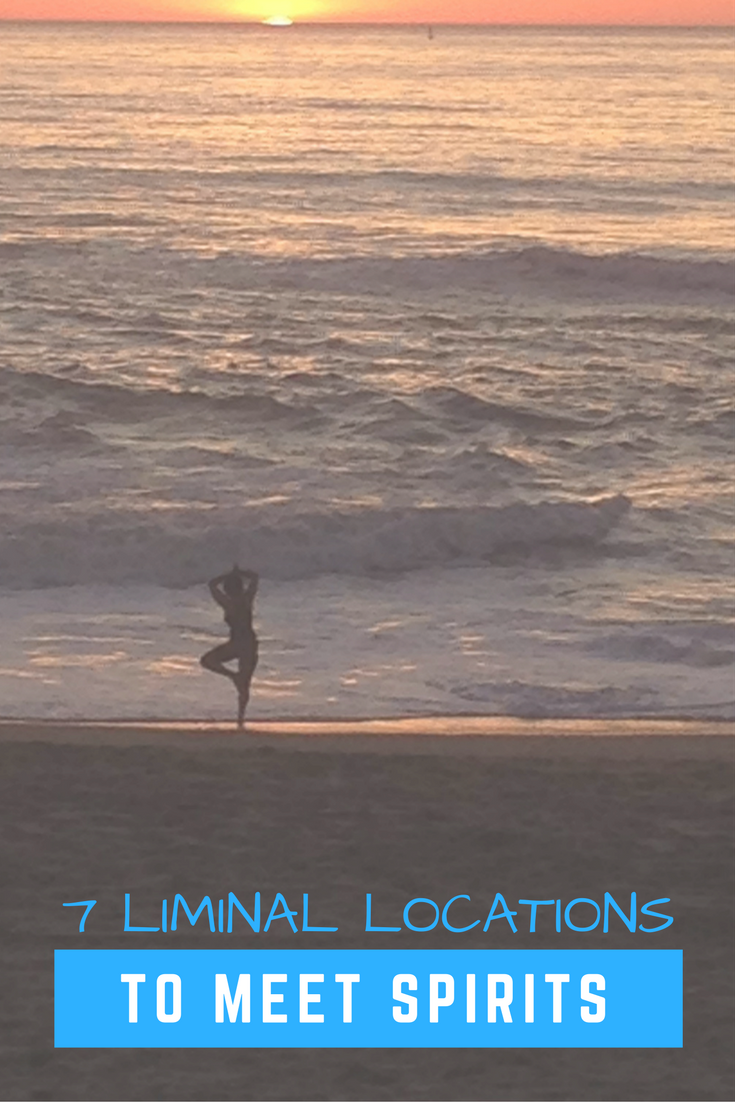 I made it to the seashore earlier this week and when I was walking along gazing out at the horizon I sent my spirit flying to the far off place where the sun sets. I also like to do this when I am riding on the highway, I look out as far as I can see where the road disappears into the sky and send my spirit ahead to that place. The magic of our furtherest sight is less explored than it could be and I hope you try sending your spirit off into the distance sometime to scout around. Like when Peter Pan says second star to the right and straight on til morning, we can fly ourselves off to any point we can see directly--Especially if we have a little fairy dust!

In the city, the railroad tracks often separate parts of town, there is a sense of a different world. Where I grew up the tracks bordered a forested park and going across them led to the wild. While further into town, the tracks separated the spooky old industrial sector from the more vibrant neighborhoods and mainstreets. The liminal exists within urban areas as much as it does in the country or wilderness. Find your otherside and take a moment to cross into it and see what ghosts and spirits haunt the different areas of your landscape.

In the alley behind my old house, a hedge of bushes stood and little tunnels made by animals broke through here and there. I would sit nearby and breath in and out through my teeth making a hissing sound to enter into a trance called the serpants breath, my eyes focused on the darkness under the hedge. As my focus intensified, my spirit could wander under the hedge and into mystical lands. When my boyfriend and I go on walks around his apartment complex which is built inside a forest, we crawl through the dense pine trees into little spaces completely obscured from outside view to sit and contemplate the important things in life. My favorite place to be is with my beloved in the trees talking about spirits and manifesting our dreams.

I think crossroads with monuments, cairns, crosses with offerings and the like are more potent then any old neighborhood or highway intersection. Folklore and history specifically describe the special shrines at crossroads and spirits travelling to the graveyard. Our modern day shrines at cross roads might be a statue to MLK Jr. or a cross covered with Teddy bears and roses where a community member was shot, or a kid was hit by a drunk driver, or even an old country road where people have piled up stones in a cairn just because, bringing their many energies into convergence. Sure the place where to neighborhood streets cross at your corner may do, but could a special crossroads be more apropo? And perhaps you could make a subtle shrine at you nearest crossroad to increase its power. Worth a try?

Its easy to imagine magic being performed at stonehenge and standing stones or other ancient ruins. If you have access to beautiful old ruins of ancient ancestors near your home there are probably also legends about magic being done there. My favorite ruins are actually an old replica of Stone Henge in washington called Sam Hill that is a memorial to WWI vets. It used to be an active roadside attraction, but its pretty much abandoned now, the gift shop is closed and empty. I go there to gather holey stones and stand on the cliffs overlooking the river with the ruins behind me.

In the grassy knolls where mushrooms and toadstools grow in circles the fairies dance. If you stand in a fairy ring on midsummer and recite lines from shakespears Midsummer nights dream, you will summon Puck of Pook's Hill according the the novel by Kipling. Kipling's work contains a lot of magical lore and what he says about fairy rings is true. Find yourself in the middle of a fairy ring and be ready, because you could really meet a fairy.

These are places where people are put to rest and their loved ones come to visit and honor them. Most graveyards have a very peaceful and relaxing energy, in my opinion. There is a direct connection between the grave and the otherworld and many magical types harness that connection to communicate with the otherside. Fairy doctors can gain their sight by performing an initiation rite during a funeral. You can go to graveyards to talk with your ancestors or the ancestors of your land if you are newer to the area. My favorite local graveyard is in the center of my city and many Masons and Eastern Star members are buried there and their stones are inscribed with pentagrams and other mystical symbols. I like to bring them offerings and inter magical items there to be charged with the liminal energy of the underworld.

I am opening registration for Spiritscraft Magic School soon and if you want to learn more about what to do at liminal areas to work with spirits and magic please sign up for my Basics of Magic E-course here.